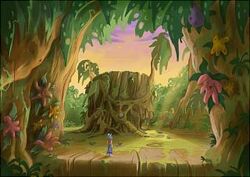 The Roots is a Jungle area, with various trees surrounding the entire premises, along with plenty of strange flowers and plants growing everywhere. Some parts are flatland, while other areas are filled with thick forests. There are many wind tunnels, and areas where freefalling can take place.

The story begins in the Roots, Kya and Frank are teleported to this location, Frank is found out to be kidnapped by the Wolfen. Aton, and other fellow Nativs, help Kya escape from the ongoing Wolfen. After losing the Wolfen, Aton brings Kya to Nativ City.

Later on, Kya must go to the third shell elevator to find the rune. There is no story surrounding this part, and is seen as a side quest, that must be accomplished to complete the game.

The Roots has 4 shell elevators.

The Roots leads to one other location.

Retrieved from "https://kyadarklineage.fandom.com/wiki/The_Roots?oldid=11748"
Community content is available under CC-BY-SA unless otherwise noted.