The Hunter is a strong Wolfen in charge of the Hunters Domain, as well as the boss fight of the Hunter's Domain level.

Clothes:The Hunter, wears a green leotard, with a brown fur vest, belt, as well as a tall brown hat. He has two armbands on each side, as well as double brown gloves, with his right glove being longer. To top it off, he has dark brown-black shows and has a Boomy just like Kya, except it's tied around his neck on a string.

Color:He is a typical gray, like most Wolfens and has a muscular build. He has two saber tooth teeth, as well as a beard wrapped specifically with red bands. Like other Wolfen, he has a tail, but what makes him unique is his tusks coming from his ears, which may be ornamental.

The Hunter is never met outside of battle, so it is unknown what his personality is like. But due to being a wolfen under Brazul, it's assumed he is quite violent and only follows Brazul.

While Kya, is in Nativ City. Atea and Area, go to the Hunters Domain, looking for clues about Kya's brother. Once Kya enters the Hunter's Domain for herself, she finds out that Atea was kidnapped by "The Hunter". Upon arriving at Nativ City, to obtain a Jamgut Birdcall, she finds Aton and Area arguing. Area ran away from the Hunter and left Atea behind, Aton is upset, but refuses to let Kya help rescue Atea. After the two continuously bicker about Atea being kidnapped, Kya puts it upon herself to save Atea. 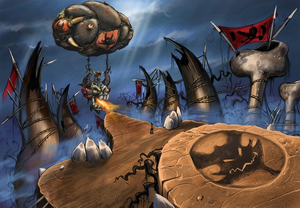 The battle begins with the Hunter, tossing an electric bomb, followed by a ten second timed bomb, that must be kicked onto the balloons that keep The Hunter's airship afloat.

NOTE: This pattern is repeated for the duration of the fight.

When all balloons have been detonated, the machine will start to blow fire as well. Now Kya has to kick the bombs into the machines mouth in order to damage and defeat him.

Retrieved from "https://kyadarklineage.fandom.com/wiki/The_Hunter?oldid=11747"
Community content is available under CC-BY-SA unless otherwise noted.