'Frank: One of your father's projects I guess?
The following article has significant spoilers for Kya: Dark Lineage
Kya: Hmm... that guy... 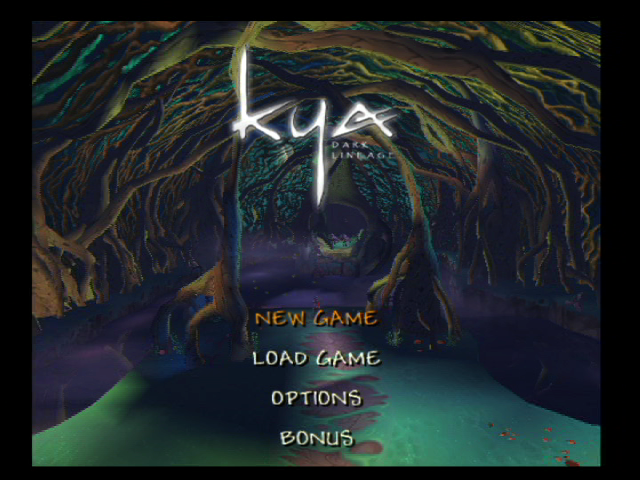 The story starts out with Kya in her room, asleep on her desk and wakes up after she hears a weird sound. Kya leaps out of her chair to grab her boomerang and walks down the hallway to investigate, she calls out for her brother Frank.

She finds Frank, who has made a discovery. Frank has found a secret room in their house, he had to break through bricks to get to it. Kya questions "What happened to the wall?", Frank says "I happened to it! Come here!". The secret room has a bookshelf with various books, a desk, and an altar. Frank concludes it must have been a secret room by Kya's father, "Alan". Kya talks about how her father abandoned her, but Frank's father was there for both of them.

As they are talking, Frank finds a weird artifact and places it on a pedestal. A strange portal, that looks like a hologram appears and Frank's eyes turn red and he says "Just a feeling I guess".. they are instantly sucked in! The lamp Frank had falls and goes out.

Kya is woken up in a jungle with strange creatures looking at her and asking if "It" (Kya) is dead, and that they'll take her to their village. They mention she'll never get up again if she doesn't move now, they are currently being chased by a mysterious primitive flying vehicle, with a cannon attached. As the player takes control of Kya, they must flee from the Wolfen. One of the creatures is captured as the other one helps Kya to safety, his name is Aton. After various obstacles of running for their lives, Freefalling and slope riding, the two get to safety. However, a Wolfen blocks the way to the exit. Aton enlists Kya to help both of them out from being detected by a nearby Wolfen, much to Kya's dismay is used as bait to lure the Wolfen into a trap.

After defeating the Wolfen by trickery, and bringing it along with him, he leads Kya to a secret city the Wolfen don't know about, named Nativ City. As Kya is entering Nativ City, a scene is shown where Frank is running from Wolfen and is eventually captured by them.

Aton brings Kya to Nativ City, a quiet village filled with his kind known as Nativs. He mentions that there are many buildings in need of creating, but there aren't enough Nativs since they continue to be captured by the Wolfen.

Aton introduces Kya to the leader of the city, known as Atea. Knowing already what has happened to Kya, he exactly how Kya and her brother came to this world, and mentions that another human once entered the Nativ world. Kya questions about the other person, Atea reveals a name Alan and Kya figures it was her father who had come through the portal before her. The screen fades once more to an unconscious Frank, who has been abducted by the Wolfen, and their Wolfen leader, who plans to use Frank in his laboratory for experiments. The Wolfen explain to their leader that there was also a girl with Frank (Kya), but they did not capture her. The leader shrugs it off, as he feels "The girl" is no threat if she is with the Nativs. The screen goes back to Atea and Kya, and Atea reveals that Alan, had changed due to mastering the magical energy of the Nativs world. Alan now goes by the name of Brazul, and became the Wolfen leader. Complaining about her father, Kya vows she must find and save her brother, in which Atea decides to introduce her to someone who can help her fight the Wolfen and Brazul.

Kya and Atea arrive at the Nativ City Dojo run by Akasa, Aton is already there with Akasa. Atea explains to Akasa that they think Kya's brother has been captured, and Kya would like to help rescue him. If Kya is willing, she can learn some fighting moves from Akasa. Aton is not up to the idea and thinks it is not safe to trust a stranger, Atea replies that it may or may not be a good idea, but he's curious to see what will happen by entrusting her. Kya is given a magical bracelet that will enhance her abilities, she is put to the test by using moves on a dummy Wolfen. The Wolfen that was knocked out from earlier was put inside the Dojo, as a protective measure. As Akasa is praising Kya for her talents, Aton and Atea warn Kya, as the unconscious Wolfen from before has just woken up! After Kya defeats the Wolfen on her own, Atea now realizes that Kya is worthy of the Awakening Power. The Awakening Power is a special ability that returns the Wolfen to their Nativ forms, Brazul has been capturing Nativs and turning them into the dreadful Wolfen. In order to use the Awakening Power, Kya must knock the Wolfen unconscious, use magical energy known as Mana, and she must have enough mana to exorcise the Wolfen, with these steps she can return the creatures back to Nativs. With some Mana, Kya exorcises the Wolfen back to his Nativ form, the Nativ simply replies that he has a bad headache and must have been caused by drinking too many Bilgoles.

Before Kya can start her adventure, she needs a weapon. Atea set up some signs for Kya, to lead her to a weapon shop. Kya runs off to the weapon shop on the second floor, but before she gets there, she runs into another Nativ character named Area. Kya meets Area, a Nativ who asks her if she gets tired of walking all the time. He thinks she should get a board, and also mentions how cheap boards are; some even go for under 50 Nooties. When he realizes she's never heard of a Nooty before, he tells her she should buy a clue while she's at it. After explaining she needs a weapon first, Area says if she gets a board, they should race sometime. 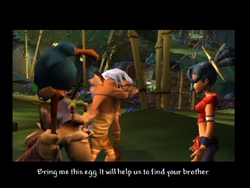 In order to find Frank, Kya must find a big Blue Egg. Kya questions why she needs to find a Blue Egg, but without answer, Atea explains that it is mandatory if she wants to find her brother. This Blue Egg is the last one of it's kind, and the Wolfen just found it recently and captured it.

Kya defeats various enemies in the Flying Forest to recapture the Blue Egg, when she finds the egg, it shakes, falls and breaks. A flying creature comes out, this being shoots a sonar wave towards Kya. The creature allows Atea to communicate with her from afar, as well as giving Kya it's own tips.

After retrieving the Blue Egg, Kya returns to the Flying Forest via a Shell Elevator, which uses the wind to transport her through a tunnel. Since she's never used a wind elevator before, she falls flat into the ground. Area comes by and is shocked that Kya managed to open the elevator, he mentions that Brazul sealed them up years ago. With these elevators, Kya can get from place to place in a matter of seconds.

Atea meets up with Kya and thanks her for what she has done so far. The Nativs that she's freed from the Wolfen curse, have started to rebuild the village. Atea takes Kya along to his hut, where he reveals to her the device that got her there in the first place. The object is consistent of 7 Runes and the Receptacle, and together is known as The Medallion, a powerful artifact that is like a door to another universe. Unfortunately for Kya, the Medallion in her world stayed in that world, she must find the Medallion of the Nativs world to go home. Kya questions why these medallions even exist, Atea does not have the answer. Atea mentions that Brazul is very knowledgeable on them, Kya sarcastically agrees to ask Brazul for help. A curious Kya wonders how the medallion was dismantled, and who the culprit was that kept the medallion from the hands of Brazul. In order for Kya to collect the pieces of the Medallion, she must get the receptacle.

There are two scenes that happen to Kya while in the Flying Forest, retrieving the Receptacle.

One scene entails Kya in getting past a Wolfen guard, she hits a switch that causes a great wind to fling a Wolfen into space. Later on, Kya is about to talk across a bridge and the Wolfen is screaming from the sky and face plants into the bridge, breaking it.

When Kya finds the receptacle, it is on a little pedestal. What Kya doesn't realize, is a strange bat like creature has taken home there. It attacks her and takes the Receptacle; Kya must chase it via an insane forest slope, using a Magic Board.

Kya lands on an Amortos and finds herself in an inward forest area, the bird creature is gone. Fortunately, it left the receptacle behind. She attaches the receptacle to her belt, and asks Stuff how it looks.

A captured and frightened Nativ, is being moved on a conveyor belt. He is moved inside of a machine, and is turned into a Wolfen. Brazul appears and requests the Wolfen to bring him "The Human", meaning Frank.

Upon reaching the Territory, Atea remarks through Stuff that "they" are after him. In order to proceed further, Kya must obtain a Jamgut Birdcall, so she can ride a Jamgut. As Kya enters Nativ City, she finds Aton and Area arguing. Aton is mad at Area for running away when Atea was in trouble, he blames Area for Atea's capture. As Kya appears, Area mentions that The Hunter got Atea. Not knowing who the Hunter is, Kya asks and they explain that the hunter is a very powerful Wolfen who controls the Hunter's Territory, it is also infested with Wolfen. Aton thinks Atea will be in Brazul's clutches in no time, but Kya won't let that happen, she's going to rescue Atea.

Retrieved from "https://kyadarklineage.fandom.com/wiki/Story?oldid=10774"
Community content is available under CC-BY-SA unless otherwise noted.