Frank! Whats going on? What happened to the wall?
This article is a stub. You can help the Kya Dark Lineage Wiki by expanding it.
I happened to it! Come here! 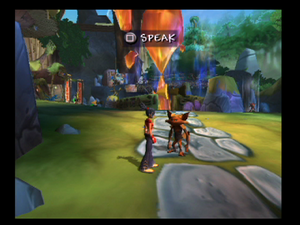 Nativ City, is the secret home of the Nativs. Once Kya has arrived, she uses it as a home base. The City is full of points of interest for Kya, where she can purchase new items, gadgets, learn new fighting moves, play minigames, and find animals for the Nativ City Zoo. It is used as a hub to travel easily to other parts of the world using the Shell Elevators. Rescuing Nativs causes them to build more shops, and minigames, and once Kya obtains new gear, more minigames will become accessible.

Nativ City is a lush grassland city with trees, animals and, some monsters. It thrives on it's villagers, creating houses, shops and minigame stations. The only monsters in Nativ City, are the Sinoc, which tend to hide in strange areas.

Aton brings Kya to Nativ City after they are chased by the Wolfen, he then introduces Kya to Atea. It is found out that Frank has been captured by the overlord Brazul, who also happens to be Kya's long lost father. The Wolfen, are in fact Nativs that Brazul has used magic to transform them into the devious Wolfen. Kya discovers that, in order to get back to her world, Kya must locate the Medallion and the 7 runes.

Blue Micken - The Blue micken can be found across from Akasa's Dojo, near a Minigame that needs 100 mana to open.

Nativ City holds a giant tree with a set of elevators to each, and every area in the world.

Without the use of Shell Elevators, Nativ City leads to two other places that can be explored by foot.

Note: This is the only Wolfen in Nativ City.

Retrieved from "https://kyadarklineage.fandom.com/wiki/Nativ_City?oldid=11627"
Community content is available under CC-BY-SA unless otherwise noted.