Atea is the chief of Nativ City, he helps Kya on her missions by suggesting what she can do to achieve her goals. He Finds Kya interesting, and does what he can to help her out. He will even go as far as looking for clues, about the disappearance of her brother.

Clothes: Atea wears a red hat, that swirls up, to down. The hat droops to the ears as well, adding two red puffs lingering past the ears and to the chest. He walks around with a staff that holds his wise cracking pet Bird.

Color: Atea is a Nativ with complete yellow fur, and has white finger/toe tips. He has a long white beard that covers his entire face; his beard splits into three separate sections, all tied with a band, one at the bottom and two at the top. His white fur also goes down his back, almost like he is wearing a cape.

Atea is an all knowing, wise elder of Nativ City. Despite this, he also has a sense of humor and is normally cheery.

Atea encounters a confused Kya, who has come from another world. He thinks he knows how she got to his world, and reveals that another person named Alan had also come to the world years prior. However, Alan goes by a new name, of Brazul. Kya puts two and two together and realizes that Brazul, originally Alan also happens to be Kya's missing father (Who created the secret room in Kya and Frank's basement, which lead to them coming to another world). Kya is wondering what happened to her brother Frank, who was not with her when she first appeared in the Nativs world. Atea assumes, that if he is not with the Nativs, he must have been captured by the Wolfen and is with Brazul.

Atea enlightens Kya to the fact that, the Wolfen are Nativs who were transformed with magic. Kya resolves to save Frank, but the only way to do so is if she prepares herself for her venture into the Nativ's dangerous world. She is introduced to Akasa, the martial arts teacher. Akasa teaches Kya to use various mystical Fighting Bracelets, which greatly enhance her strength and other abilities. After seeing her abilities, Atea believes she is suitable for a special power. Kya is blessed with the Awakening Power, which allows her to exorcise unconscious Wolfen and transform them back into Nativs. Atea easily agrees to help Kya find her half-brother Frank, she learns she must find a magical Medallion which will allow her to return to her own universe. The medallion was split into seven Runes, which are emblems made of pure energy. Runes must be housed in a special amulet known as the Receptacle. Atea informs Kya that before she can find the Medallion, Runes and Frank; that they must obtain a Blue Egg, the last one of it's kind. Much to her confusion, Kya does not understand why she needs a blue egg for her quest, but all will be revealed once she finds it. Aton says that the Wolfen captured the Blue Egg recently, so it will be more difficult to obtain. She must go to the Flying Forest to retrieve it; Aton set up markers for her to find the way to the forest. 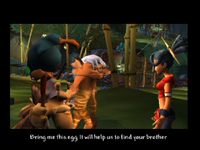 After Kya obtains the Blue Egg, it moves and smashes to the ground. A flying creature named Stuff, appears out of it. Atea clarifies that the creature is known as a Galbos, and it allows Atea to talk to Kya via Telepathy. This will allow Atea to address situations to Kya, while she is out on the field.

Once Kya retrieves the Flying Forest rune; Atea states through Stuff, that him and Area are in the Hunters Domain and that she should meet them there. Unfortunately upon arrival, Kya finds out that he has been captured by the Hunter's Domain Wolfen. In order to proceed through the Hunter's Domain, Kya must purchase an item that allows her to ride a Jamgut. Coming back to Nativ City, she finds Aton and Area arguing over Atea's capture.

The following are lines that Atea says during non scenes.

Atea: Kya... it's me, Atea! This animal let's me communicate with you telepathically!

Atea: It's the forest rune! Get close to it and put it in your receptacle...Ho, ho... I gotta hide! There are too many Wolfens around here!

Atea: Bravo for the receptacle! I'm with Area, we're looking for clues about your brother in the Hunter's territory, come and join us!

Atea: You have managed to get the rune in the forest. Apparently Brazul didn't locate it. But what the...Ah...No! They're here...Kya! Help me! Aahh!

Atea: Kya, I remember that they took me down through some sort of pipeline with the rubbish. Try to find the entry.

Retrieved from "https://kyadarklineage.fandom.com/wiki/Atea?oldid=11738"
Community content is available under CC-BY-SA unless otherwise noted.